We Don't Deliver to Your Area Yet..

We're sorry, it doesn't look like we can deliver to your address yet.  Typically we need 15 or more people in a specific area, and then we can start up a route.  Feel like you've got the interest in your area?  Give us a call or send us an email using the contact page!

We Deliver to Your Area!

We're excited to deliver our farm fresh goodness to your door!  It looks like you will get deliveries on: 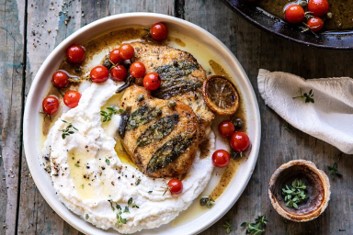 We're sorry, this product is only available for the current week and it appears you are either past the cut-off time or have already received your delivery.

1.Season the chicken with salt and pepper. Place the flour and parmesan in a shallow bowl and dredge the chicken through the flour mix, pressing gently to adhere.

2.Heat the olive oil in a large skillet set over medium-high heat.

3.Add the chicken and sear on both sides until golden, about 2-3 minutes per side. Remove the chicken from the skillet.

4.To the same skillet, add the butter, sage, and lemon slices. Sear the sage until crisp, and the lemon until golden on each side, about 1 minute. Remove the sage and lemon from the pan and add to the plate with the chicken.

5.To the skillet, add the tomatoes, thyme, and season with salt and pepper.

6.Cook until the tomatoes begin to pop, about 4-5 minutes. Add the chicken stick to deglaze, making sure you scrap all the brown bits off the bottom of the pan.

7.Season with salt and pepper. Return the chicken to the pan and place in the oven for 12 minutes until fully cooked through.

3.Cauliflower - Place the florets into a medium pot with almond, Garlic Herb Cheese Spread, salt, and pepper. Cover the pot and turn burner to simmer.

1.Steam for 25-30 minutes until cauliflower is nice and soft.

2.Keep an eye on it to make sure it doesn’t burn on bottom.

3.Put all the cauliflower and the liquid in a blender or food processer. Blend until creamy. Add more liquid if need to blend.

4.Put the purée back in the pot on a very low simmer without the top to keep it hot until you are ready to eat.

Alternative - if you don’t have a food processer or blender - On a separate sheet pan. Liberally cover the cauliflower with salt, pepper, and olive oil. Roast them in the oven for 25-30 minutes or until the cauliflower is tender and slightly golden around the edges.  Remove from the oven.

This delivery truck is empty!

We Deliver To Your Area

To create your account and begin placing orders click continue. Or you can return to the market to browse our products.

Choose the distance you want to search for a pickup location:

Would you like to remove this recurring item from just this delivery or all future deliveries?

There is no Checkout or Submit button to finalize your delivery. These items will be delivered unless removed. Enjoy!